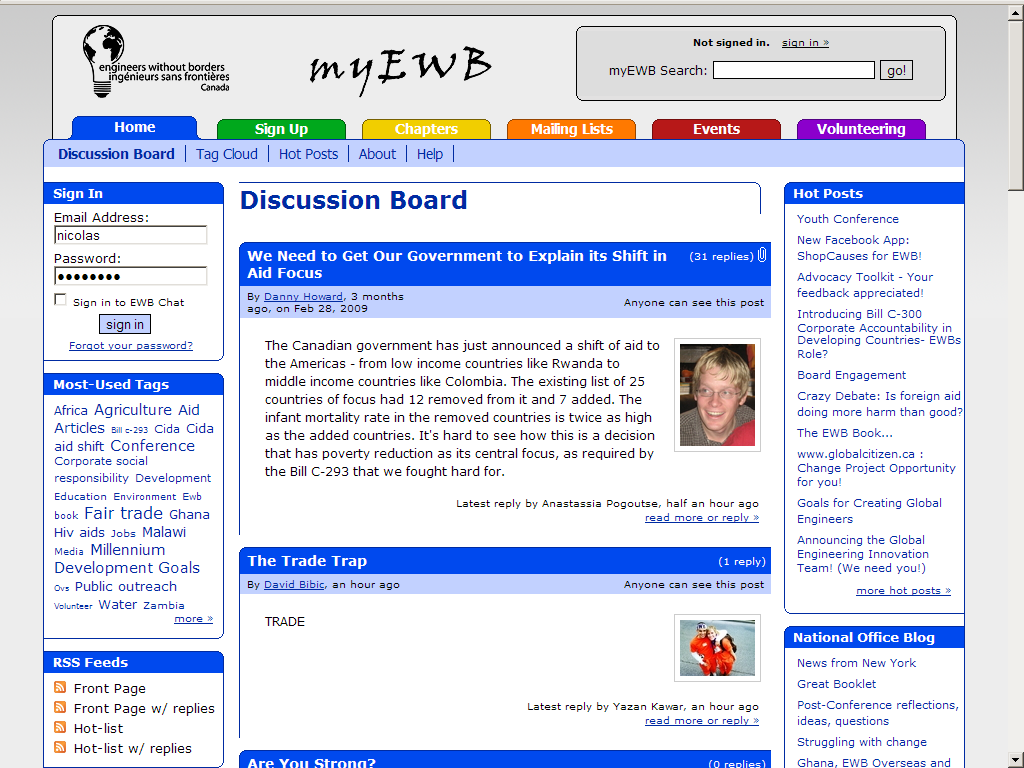 From October 2005 to May 2010, myEWB.ca was Engineers Without Borders Canada's official online community system. During that time, tens of thousands of people used myEWB to participate in thousands of online conversations, send millions of emails, schedule hundreds of events, share files, apply to serve overseas, register for conferences, pay their membership dues and otherwise collaboratively work towards eradicating poverty. As the team leader and major contributor to the myEWB project, I am proud to be able to host a small page for OpenMyEWB: the now-open-sourced software that powered myEWB.ca.

At the time of its inception (Spring 2005), no open-source or reasonably-priced software was available to replace the existing EWB Intranet, and meet EWB's evolving needs. As a distributed organization with centralized IT, EWB needed a federated online community system: each chapter needed to be able to manage its own discussion board, membership list, files, events etc, within a single centrally administered system, which would provide certain types of cross-chapter functionality (e.g. a central database, national mailing list, national discussion board etc). None of the alternatives considered at the time (Drupal, XOOPS, phpBB etc) provided this functionality. So it was decided that the Intranet would be replaced by a new home-grown system: myEWB. Launched in the Fall of 2005 with a small but powerful feature-set, myEWB.ca continued to evolve to adapt to EWB's changing needs, with the eventual inclusion of all of the features listed below and more.

I gave a short talk about this evolution at a conference called BitNorth.

OpenMyEWB is a lightly-refactored fork of the main myEWB.ca codebase. All user-visible references to Engineers Without Borders were removed, and the system was made a bit more generic and configurable. Some features, such as myEWB's original chapter reporting module, the LDAP email-creation integration and the live chat system, were deemed to be too EWB-specific or to have too many dependencies and were removed.

OpenMyEWB is being made available as open-source partly on principle, as software that was built for and by a non-profit and should be shared, and partly in the hopes that some other organization might eventually use it or be inspired by it.

OpenMyEWB is a Java servlet-based system which can be deployed using Tomcat. It uses Hibernate as an object-relational mapping layer on top of mySQL and uses Velocity as a template layer. Its mailer system is written in Perl, using Mail::Bulkmail. Logging is courtesy of log4j and jQuery is used for JavaScript effects/AJAX. Graphing is courtesy of JFreeChart. The OpenMyEWB stack is similar in structure to its more modern web-framework cousins Rails and Django, having evolved partly inspired by them, but is nowhere nearly as generalized. That said, we found it flexible enough to add/remove complex sets of features in a fairly decoupled way without too much fuss.

Anyone wanting to deploy an installation of OpenMyEWB will need access to a host capable of running Tomcat or another servlet container, as well as a mySQL database. For bulk-mailing, access to Perl will be required, as will an SMTP server. With a bit of modification, OpenMyEWB could be made to run on other databases, such as PostgreSQL, and the Perl components could conceivably be replaced by another equivalent system written in any language.

Installation and administration of OpenMyEWB is not for the faint of heart or the non-technical, and its release is more of a vanity project of only academic interest but if anyone wants to make a serious go of using it or learning from it, I would gladly help out a little bit. A readme can be found in the zip file with basic installation and configuration instructions.

Code from this post is up on Github at nicolaskruchten/OpenMyEWB